Digital ID in the UK:
Insights from Exploratory Research Mapping

Insights into a federated ID system

The identification and authentication process maps provide an insight into the functioning of a federated ID structure atypical to most other national systems we have seen. By allowing different identity providers and varying levels of identity assurance, users are allowed the choice of accessing services based on the level of identity assurance they are able to reach. This federated architecture, both of providing identity services and of storing private information, also ensures there is no single point of failure. A central hub or “broker”, attempts to act as a “privacy barrier” between the service provider and the ID provider, mediating the access of identity providers to government services.1 Another advantage that comes with the use of several private identity providers is the presence of redressal mechanisms and customer service in case of technical difficulties; the Verify framework allows ID holders and applicants constant user support, either through their identity provider or directly to the Gov.UK service. There are undeniable drawbacks to a federated structure as well—allowing private identity providers to access and potentially share private information and government records. For instance, in the identification map for Verify, we see that identity providers check details provided by applicants against records of mobile phone providers, credit agencies, HM Passport Office or the Driver and Vehicle Licensing Agency. Although intended to be more accessible to those residents who do not have sufficient government ID, this sharing of information amongst private service providers, even in the presence of rules issued by the government, is alarming. 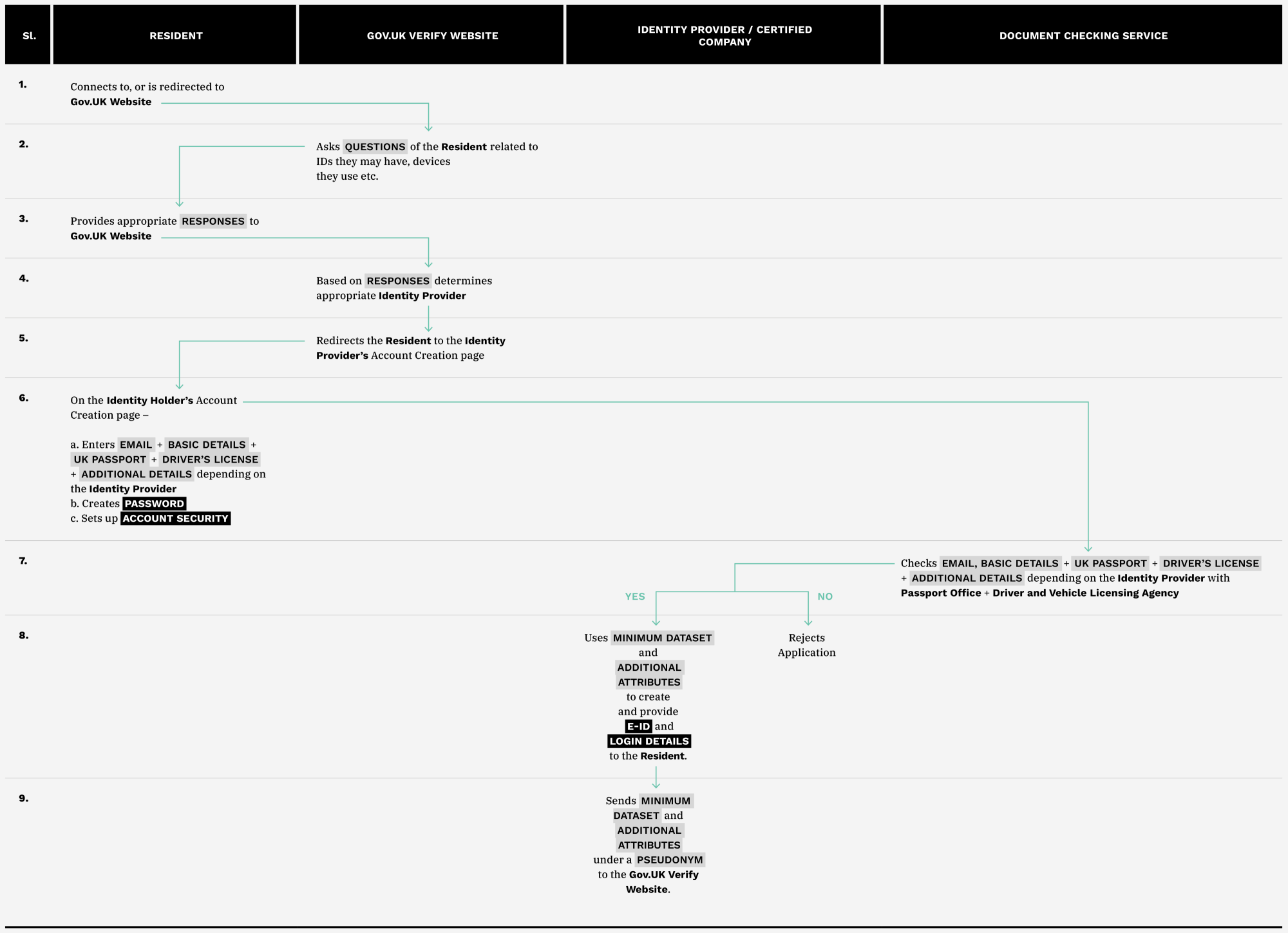 Verify can currently be used for a select number of government services, with many more being envisioned. For instance, residents can easily prove their identity to potential employers while applying for a job, enabling the employer to complete the required check of their criminal record before proceeding with the application. However, Verify’s future was hampered by a scathing report from the Public Accounts Committee (PAC) in 2019.2 The report highlighted that less than half of the expected government services signed up to Verify, and fewer than one-sixth of the forecasted users signed up for the ID. It estimated that this was due to errors that made it onerous for users to access services through Verify. These issues usually arise during the process of identification, where residents are sometimes unable to verify themselves because they don’t have the required documents, or occasionally even despite submitting the correct documents. GDS was also unable to design a product that services wanted to leverage, in turn leading Verify to an uncertain future after their public funding stops in 2020. Perhaps due to this, five of the seven original identity providers have stopped providing services to Verify, now leaving only Digidentity and Post Office for residents to choose from.3 Although easy access to Universal Credit was championed as an important benefit of Verify, it was found that only 38% of Universal Credit claimants can successfully use Verify to access it, as they lack the required documents. Universal credit applicants are typically the most vulnerable persons, and the unsuitability of the Verify platform for their necessities was highlighted as a key failure of GDS.

Note: The ongoing COVID-19 pandemic has resulted in an unprecedented surge in demand for Verify, and resulting delays in identification. This has had significant exclusionary impacts, particularly for Universal Credit claimants facing salary cuts and unemployment. To address this bottleneck, the government has provided an alternative means of identification via its Government Gateway, that enables identification for those who may not have sufficient documentation by providing details that only they would have access to, such as their passport or payslips, or even without these documents. In addition, all identity providers provide user support 7 days a week, and Gov.UK provides a support form for complaints. However, there continued to be many complaints of delays in registering and accessing emergency benefits. We see that while the government has been able to mitigate issues of accessibility for those who might not have computer or internet access (by providing telephonic help or physical submission of documents for access to services in these cases), it has been unable to adequately ramp up its system to address demand during an emergency.